Some time after the events of the first game, Sakuya returns from an errand for Remilia involving a book, only to find the mansion empty. It isn’t long before Yukari appears and gives Sakuya a clue about where Remilia is and vanishes soon after. She sets out to look into Yukari’s clue along the ruins of the castle long since destoryed, only to find it rebuilt. At its gate, she finds Meiling tied up and gagged.
As she figures out what Meiling is saying, Alice comes flying down, at which point Sakuya assumes she did it. They fight and afterwards, Alice reminds Sakuya to untie Meiling, who reveals that she was kidnappe from the garden… while napping. Alice has an alibi of seeing her shopping earlier and reveals she’s here due to strange energy she sensed. Sakuya then takes Meiling with on her quest. 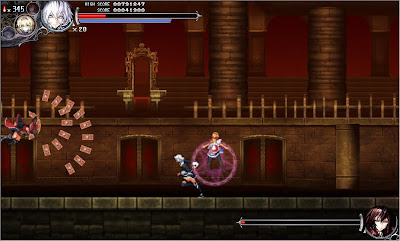