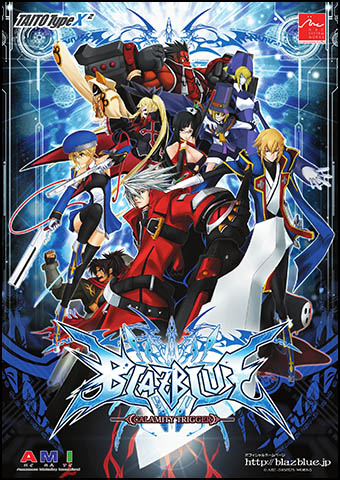 In the 13th hierarchical city, Kagutsuchi, the Librarium regulates the amazing power of “Armagus”, a fusion of magic and technology. Currently they are after a wanted criminal named Ragna The Bloodedge, also known as “Death”, who wants to destroy the Librarium. Due to Ragna possessing a powerful form of Armagus known as the Azure Grimoire, people far and wide are after not only his bounty, but his grimoire as well. This is where our story begins…

The first hi-res 2D fighter from the creators of the Guilty Gear series!
Experience the beauty of high-resolution, hand-drawn sprites on 3D backgrounds, all in glorious high-definition.
Over 10 unique combatants to choose from!
Choose a character that represents your own fighting style, like the lightning-fast Taokaka or the wickedly powerful Tager.
Drive your way to victory!
Use the unique “Drive Attacks” specific to each character to decimate your opponent. Depending on the character, control the elements like wind and ice, or even absorb the life force from your opponents.
A plethora of offensive and defensive options are at your disposal!
Take advantage of Barriers, Counter Assaults, Rapid Cancels, and Distortion Drives to turn the tide of battle!